Nobody in their right mind sets off to do a movie with 25 main characters: Behind the Scenes of the Downton Abbey Movie 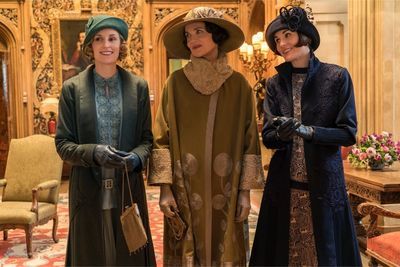 After five years as a worldwide phenomenon, it was a daunting challenge to re-assemble the more than two dozen stars of "Downton Abbey" for a feature film that would satisfy both devoted fans and newcomers and give each of the main characters sufficient screen-time, all with storylines that could be resolved in a fraction of the time of a television season. Co-creator/writer Julian Fellowes makes it work by having everything revolve around an event that was dramatic and—most importantly—gave Anglophilic fans plenty of lush period details to sigh over: a visit from the King and Queen.

In an interview with RogerEbert.com, producer Liz Trubridge and actors Michelle Dockery (Lady Mary) and Laura Carmichael (Lady Edith) talked about making the film, what they love most about the era of the early 20th century, and about why the upstairs/downstairs stories of the nobles and servants of Downton Abbey have such enduring appeal.

What are the most important qualities of a great producer?

Liz Trubridge: I think we’re ultimately enablers. What we do is create an environment in which the people we bring on can give their best work. So a lot of the time what I’m doing on set is listening and if I can hear rumbling I can smooth it before it becomes thunder.

And how did you learn how to be a producer?

LT: After university I went to BBC and I knew then very quickly the job I wanted to do. I suppose at some level I saw it as my skill set. What I wanted was to be in there right from the beginning and then bring the right people together and then just enable it to happen and then take it all the way through post-production, which, I love to delivery. The director will do his or her cut and then the producers come in and have their say. We work very collaboratively and that’s what I love about this job. So you can fine-tune performances, you can pick little bits here and there, and then once you reach a picture lock you then start working (well you’re working on the visual effects right from the beginning). But once you then start working on the sound and you have the music (you do music spotting and sound spotting), and so every scene you're going through just saying it would be great to hear that momentum here and you want to hear the ensemble. You say, "The rain has to be very authentic here," and "Would you hear it in that room?" I think you create the richness that people will only appreciate probably subliminally unless they are sound people.

Though I did hear a complaint from one viewer who was not a sound person but a bird person. We were doing the second season, which takes place during the first World War and it was the Armistice, was the honors list and we had a scene where Robert was celebrate the Honors List to remember the people, a very solemn, dramatic scene. We got a letter in the following weeks in the Daily Telegraph that said, “My enjoyment of last Sunday's episode was entirely ruined by the fact that I heard the sound of a chiffchaff outside the door of Highclere Castle [where Downton Abbey is filmed] and everyone knows chiffchaffs migrate in the summer.” So, I had to look up what a chiffchaff was, and the migrating habits of it; so people do hear things. It is amazing what people pick up on.

Sometimes we have to make choices that are not entirely historically accurate. The fabric the servants would have worn would not look good on film, and the accents of that era would be hard to understand today. Also, our costume and sound crew have to work closely together. It is such a large cast that they all have radio mics. So we cannot have a costume that makes too much of a rustling sound.

How does wearing the period costumes help you create the character?

Laura Charmichael: The costumes always get you there. And the locations have so much sort of muscle memory now; you’re arriving at Highclere, you’re halfway there, just being in the house.

The hats in the movie are truly remarkable.

MD: I love that line that Maggie [Smith] says in film when Laura says, "We can can go change," and she says, "You talk as if that was easy," because actually they do actually have to go upstairs to take off their hats, so it’s not that simple.

LC: If you arrived for lunch somewhere wearing a hat you’ll keep it on versus if you live there, and the reason for that is hat hair. You don’t want hat hair at the table. Everyone just keeps it on.

How was it different making a movie instead of filming for television?

LT: In terms of the logistics of producing, they’re pretty much the same but of course nobody in their right mind sets off to do a movie with 25 main characters. So that was the big challenge. The other huge challenge, which we were very conscious of, was we were lucky enough to have accrued this fan base over the years of doing the television series. We so wanted to do the film, but we knew we had to make it bigger but keep the essence of "Downton" and still give a bit more. So we were very mindful of that all the way through. Julian came up with this storyline or a narrative that could feed in all the characters and then somehow linked into it and that was the biggest difference.

During the course of the television season you can bring your characters forward and back and give them their moment into the spotlight. In a movie you have to do that in two hours. It’s one of the skills that Julian has harnessed. He can satisfactorily give somebody three scenes and it feels like they’ve been on screen a lot. The other thing about an ensemble cast is even if they’re not speaking or they’re not part of it, they’re all part of that household and in many scenes. One advantage was although we had only nine and a half weeks to shoot, which was quite short, for us having done the television series that wasn’t short for us, so we could just spend more time just getting more coverage, more angles. We even spent a day with a drone at the house from sunrise to sunset, moving around the house following the sun. It was a great luxury.

MD: The first couple of days we were thinking, "Our faces are suddenly going to be huge on screen," and for a minute there was that feeling of, "Should we be doing anything different?" Of course, very, very quickly you realize it’s the same; you don’t need to do anything differently, you do what you did in the show and that was that. One other thing that was different about the film was that we had a bit more time to actually shoot each scene. For us it felt quite similar so it's more what's going on around you that was different, more coverage on the house. I felt when I was watching the film there were parts of the house that I hadn’t even seen before like the roof; how high it goes up.

LC: Our style isn’t jump-cutting over the place, but some of the shots were different. Even though that’s not technically more coverage it is more complicated if you’re starting your day filming the TV series and they say, "I’m going to have you come in through here and the camera will follow behind you on Steadicam and then having them come across here." If we were doing television, we'd say, "You're never going to get through all of that in a day." But we had more time. For the movie we were able to go, "What is our fantasy? How can we shoot this?" So there’s a dining room scene when they come to serve and we've seen that before. But because we had the chance to shoot it differently, it is this kind of emotional moment and by the time you get to the shot, something you’ve seen a hundred times before we come in, almost made me cry.

How has the dynamic of your characters changed?

MD: Well they’re both much happier and they’ve both got to a much more settled point. And they live quite far apart. Edith lives all the way up in Scotland. They’re both a bit more settled in themselves and in their life that changes the way you are with people, doesn’t it?

LC: They're never going to be the best of friends, but there is a closeness now and the way it resolved itself in the series was understood that she had done something that had damaged Edith and she fixed it. That was the surprise to Edith. She didn’t expect Mary to do it but it was the right thing to do and she did it.

MD: And there is a kind of ease with one another now and they had that sort of chat at Mary’s wedding like We’re family at the end of the day. We have to be in each other’s lives." They almost enjoy each other in the film I feel." Laura and I are so used to playing at frosty with one another so Michael had to tell us to kind of just pull it back a little bit; we were sounding a bit mean. And you see the difference in the generations. They are not going to be like their mother. They understand the possibility of change because they went through it. They know there's something more.

LC: And they want to get it. They're not just going to wait for it. Edith's story took a sharp turn when she was jilted. And she says, "I would have had a vote if I was married." I love the way Julian tied in the romantic heartbreak to what was going on at the time.

If you could have one thing today from that era, almost a century ago, what would it be?

LT: Do you know what I really loved? I love that decanting machine for the wine. It is beautiful. I even found one on eBay, but it was ludicrous amounts of money.

MD: I think it’s the care put into the objects. It was just that one thing that’s so precious and I think we take that for granted now. I love seeing them whenever we’re at the studios. Carson’s office has a beautiful typewriter. They had fewer things but the workmanship was beautiful.

LC: Yes, the inside of the car is nicer than any fancy New York bar. The seats and trimmings and the telephone for talking to the driver. I guess our characters are living in luxury so it’s like the best kind of gadgetry of the day, and there’s something I care about in the objects that is really special to me. That's part of the nostalgia that people love about "Downton Abbey."

MondoCon 2019 Recap: The Beloved Art Convention is Bigger and Better Than Ever