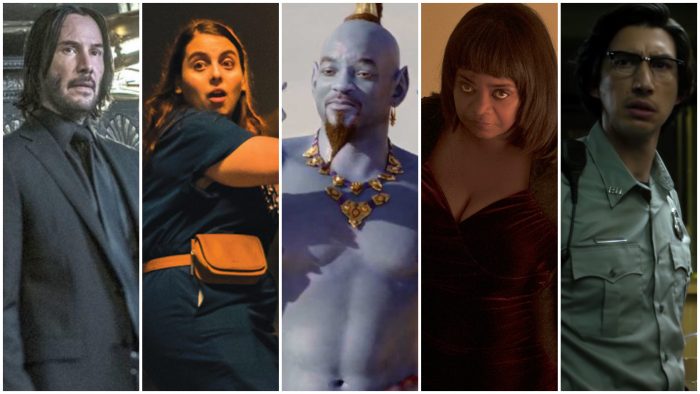 It’s that time again! Looking for physical media to augment the wild, ever-expanding world of streaming material? Then you’ve come to the right place my friends. These are the new Blu-ray releases you should check out this week.

The Men In Black franchise gets a reboot-sequel with Men In Black: International, one of the worst studio movies ever made! Look, we all know that Chris Hemsworth and Tessa Thompson are talented, charismatic actors. And thanks to the Marvel Cinematic Universe, we know that the two of them can work together well. But you sure as hell wouldn’t know that while watching Men In Black: International, a movie that utterly wastes Thompson and Hemsworth, and saddles them with lame jokes. Sure, they look hot as hell in those finely tailored black suits. But the plot, which involves a mole working within the Men in Black, is boring. Then there are the special effects. The original Men In Black benefited from some wonderful practical make-up effects from Rick Baker. International gets rid of all that, and slathers on the CGI. It just looks terrible.

It isn’t. Look, this column is all about selling you on physical media, and recommending movies you should plunk your hard-earned cash on. But I can’t in good conscience recommend you do so with Men In Black: International. Go buy something useful instead. Like a sandwich, or a bottle or bourbon. Or I guess if you wanted to play a really funny prank on your friends, you could invite them over and say: “Hey, I want to show you this great movie!” Then you put this on and watch their faces.

As far as these things go – these things being soulless corporate products tapping into nostalgia – Aladdin is surprisingly good. The trailers for Guy Ritchie‘s live-action remake looked dire, but the end result is perfectly harmless, and even charming at times. And the one element that looked somewhat questionable – Will Smith‘s CGI-enhanced Genie – ends up being a highlight. Smith is probably the best part of this movie, followed by Nasim Pedrad, who is hilarious and scene-stealing as a handmaiden to Princess Jasmine (Naomi Scott). The plot is virtually the same as the original: street rat Aladdin (Mena Massoud) gets hold of a magic lamp with a genie inside, and uses his three wishes to change his life and woo the princess. Jasmine’s role has been extended considerably from the animated film, giving her a lot more to do, which is a welcomed change. Ritchie is rather lackluster at directing musical sequences, which is a bit of a problem since this movie is packed with them. But beyond that, he (mostly) succeeds at everything else.

The 4K Blu-ray release boasts a fine transfer, making the many colors of the film pop considerably. In addition to that, you get a few bloopers, a handful of deleted scenes, and music videos. There’s also a behind-the-scenes video journal featuring Mena Massoud that is breezy and entertaining and has Massoud providing a lot more charisma than he does in the finished film.

One of the very best films of the year, Olivia Wilde‘s Booksmart is a funny, witty, and genuinely sweet coming-of-age flick. Yes, it has its fair share of raunchy, often surreal humor. But it also has such a big heart – it’s the type of film that gives everyone a fair shake, even the characters who are set up to initially seem like antagonists. The plot concerns two high school seniors – Molly (Beanie Feldstein) and Amy (Kaitlyn Dever). The pair have spent their entire school experience overachieving to get into good colleges while ignoring the usual teen craziness. But on the eve of graduation, they realize that all their party-loving classmates managed to get into good colleges as well. Molly decides that they have one night to prove that they can be cool, and so the pair head out to find the biggest party of town, ending up on one misadventure after another. Feldstein and Dever are wonderful together, bringing the best out in one another. The real scene-stealer, though, is Billie Lourd, playing a zonked-out classmate who somehow manages to show up at every turn.

How can you not want to own this movie? Booksmart is the type of comedy worth watching again, and again. Hell, I’ve already watched it three times, and will probably do so again before the year ends. It’s so ultimately warm, and sweet, that you can’t help but get caught up in its world. I tend to avoid high school movies, simply because my high school experience was an absolute nightmare and I have no desire to reflect on it. But I can’t help but be won over by Booksmart‘s charms. The disc comes with a commentary by director Olivia Wilde, which is always a plus in my book – the fine art of commentary tracks is a dying breed.

The John Wick franchise somehow continues to get better and better. In Chapter 3, the world-building expands even more, as Keanu Reeves once again fights his way through hordes of fools dumb enough to get in his way. The action in Chapter 3 is non-stop, kicking-off with a breathless chase sequence that involves John hopping onto a horse, and more. The series has gotten to a point where I’m not sure if it can keep topping itself – but I sure as hell would like to see it try.

John Wick: Chapter 3 is one of the year’s most exciting movies, so how can you not want to get your hands on it? Besides, it boasts several behind-the-scenes featurettes showing Keanu Reeves be his usual charming self as he learns to do all the crazy shit he does in the film. You even get to see him train on horseback riding, and he looks as if he’s having the time of his life

Ma really should’ve been better than it turned out. The premise is solid, and the film boasts a wonderfully unhinged performance from Octavia Spencer. But the movie itself is oddly lax, with a story that never really goes anywhere. Sure, it’s fun to watch Spencer’s Ma go nutso – but the rest of the film never lives up to her performance. The plot involves a bunch of teens who use a local woman’s house as their personal drinking spot. Unfortunately for them, the woman – who wants to be called Ma – has ulterior motives. Don’t make her drink alone!

Honestly, if you wanted to skip owning this, that’s fine. You do get an alternate ending that suggests a much different fate from Ma, and I guess is meant to set up a sequel, but probably won’t at this point.

What if Jim Jarmusch got a bunch of his friends together and made the most laidback zombie movie ever created? Well, you don’t have to hypothesize about that, because it happened, and the result is The Dead Don’t Die. It’s easy to enjoy Jarmusch’s easy-going zombie flick, primarily because of the cast –  Adam Driver, Bill Murray, Chloë Sevigny, Steve Buscemi, Austin Butler, RZA, Tilda Swinton, Tom Waits, Danny Glover, Caleb Landry Jones, Rosie Perez, Carol Kane, and Selena Gomez – all of whom are clearly having fun. Driver is the standout here, playing a cop who quickly realizes there are zombied afoot, but who also doesn’t seem all too concerned about it. Yet as entertaining as it is to watch Driver and company, The Dead Don’t Die is so unconcerned with, well, anything, that it starts to grow a bit tedious. One can’t help think Jarmusch would’ve been better turning this into some sort of hilarious short film rather than stretch it to a mostly amusing feature-length experience.

The biggest draw of this movie is the cast, so it’s only appropriate that all of the special features included here focus on them. We get a one-on-one with Bill Murray, being his usual droll self. We also get plenty of behind-the-scenes moments, as well as discussions as to what makes The Dead Don’t Die different from all the other zombie entertainment that’s so prevalent these days. Like the movie itself, these features aren’t groundbreaking – but they’re fun, and make the movie worth owning should the urge strike you to ever want to spend more time with these people.

[Video] “We’re All Gonna Die”: Preview the Next Episodes of “American Horror Story: 1984”!