Zach Galifianakis knows audiences love his “Between Two Ferns” interviews just as much as he knows they’ve reached their limit. Three years ago, in an interview with the Los Angeles Times, he matter-of-factly described the hit Funny or Die web series as “one note,” admitted he didn’t know what else to do with it, and, after interviewing everyone from Brad Pitt to Barack Obama, said the show had “kind of run it’s course.” He later resurrected the bit to support Hillary Clinton’s presidential campaign — much like he interviewed Obama to help Healthcare.org — but the latest incarnation of “Between Two Ferns” isn’t so philanthropic.

“Between Two Ferns: The Movie” knows it shouldn’t exist. Given Netflix money to become more celebrity-decorated Netflix content, writer, and director Scott Aukerman’s 82-minute feature is styled as a mockumentary, using a purposefully flimsy plot to stitch together a bunch of interviews in one easy-to-sell package. While the absurd humor pairs nicely with a film that parodies its own existence, knowingly winking at the audience every time it tosses in a convenient actor or an inconvenient yet easy-to-overcome obstacle, everything outside the ferns can’t compare to what’s between. Stacking all those interviews on top of each other dulls their overall effect.

Still, there are laughs throughout, and even if they’re inconsistent, some are really, really sharp. Will Ferrell stands in for Netflix, playing a Funny or Die executive (as he is in real life) who walks around with a digital click tracker measuring how many views his website gets (as he might do in real life). Each click, he tells viewers, “equals more green (rubs his fingers together), which equals more white (snorts cocaine), which equals more purple” (a feather boa he likes, apparently).

“Between Two Ferns” is a major source of those clicks, so — even though he almost killed Matthew McConaughey, in an opening interview that’s pretty great, save one McConaughey-mistake — Ferrell wants more episodes. Galifianakis’ character doesn’t care about money, but he does dream of having his own primetime talk show, and Ferrell promises him one if he does 10 interviews in two weeks. From there, the movie writes itself, as Galifianakis and his group of co-workers (including Lauren Lapkus and Ryan Gaul) drive from town to town, picking up celebrity interviews at random, while making their way to Los Angeles. 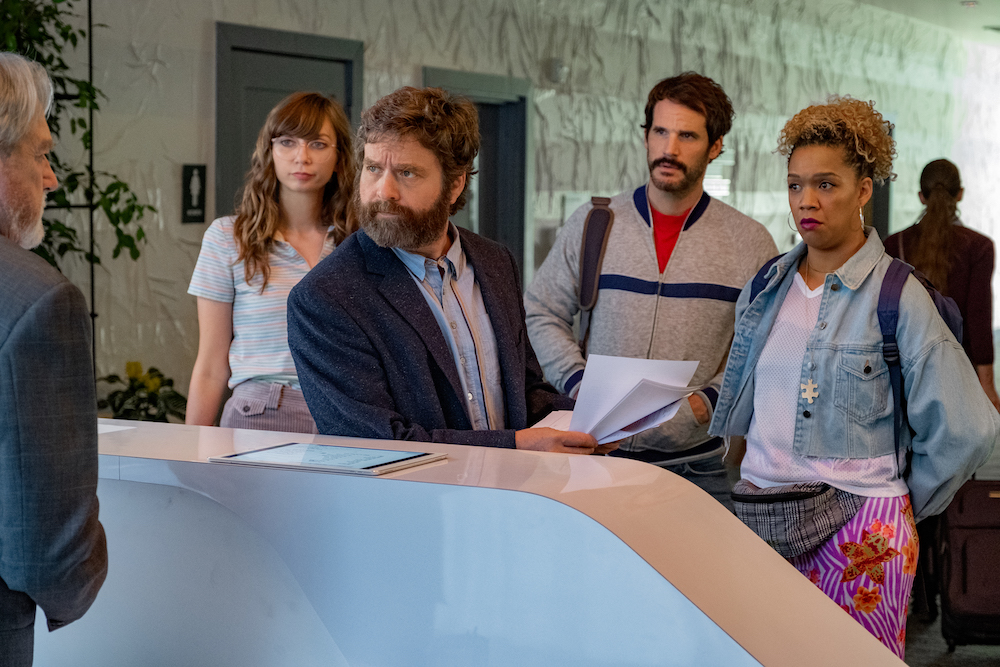 “Between Two Ferns: The Movie”

The road trip itself is unimportant and rarely worth the time it takes up, so let’s talk about the interviews. By my count, Galifianakis actually fits in 14 sit-downs between the ferns, with a few extra behind-the-scenes pop-ins from the likes of Rashida Jones and John Cho. The key to these segments — much like what made fellow celebrity interview satire “Primetime Glick” so good — is that each subject doesn’t burst the bubble. Galifianakis’ clueless, often antagonistic interviewer, who openly expresses his distaste for celebrities to Adam Scott, only works when the other person reacts naturally.

For instance, when Tessa Thompson says she’d be happy to meet lead Creed vocalist Scott Stapp, so long as she doesn’t have to drive anywhere, that’s within the bounds of reality. If someone was foolish enough to mix up the movie “Creed” with the band Creed, as Galifianakis did, she might really say that. But it’s even better when he asks her about overweight, unattractive women in Hollywood and she not-so-subtly mocks his appearance — that’s not only in line with Thompson’s advocacy for women, but her dry reading keeps the joke plausible. It’s a calculated joke within an improv environment, but it still feels like it could’ve been made up on the spot.

Other highlights include Benedict Cumberbatch (the look Zach gives him after his cape vs. cloak comment is gold), Paul Rudd (who plays off his nice guy image and pretends to enjoy Zach’s mockery), and a quick bit from Chance the Rapper (who goes off on Zach). It’s fun when the subjects protect the curated celebrity image Galifianakis is attacking. They don’t have to be surprised that he’s less than a doting host working overtime to feign intimacy and market their movies, but they do have to try to hold up their end of the arrangement and be themselves (or, at least, the version of themselves they are on Colbert, Kimmel, etc.). That’s why some of the forced bits don’t play as well, like a jealous John Legend’s surprise appearance, or when Peter Dinklage has to serve the plot more than their interview.

As a delivery device for more time between the ferns, “The Movie” is purely serviceable. It doesn’t revolutionize or reinvigorate the web series, so much as it draws on nostalgia from when the idea still seemed fresh. “Between Two Ferns” thrived with the element of surprise; you never knew when a new episode would drop, and each five-minute segment felt like a special treat whenever it did. There’s a joke in the movie where Lapkus’ producer finds out Zach thinks they’ve been using the same two ferns for over a decade. That’s plausible, since ferns can live a long time, but it’s irrational for a TV show demanding un-wilted, constantly green foliage. Some things just aren’t meant to last forever, and while it helps to acknowledge as much, that concession isn’t a magic pass for extra time.

“Between Two Ferns: The Movie” is streaming now on Netflix.

The Unsung Gems of TIFF 2019: Three Under-the-Radar Films You Should Know About